The Inhaler Model is a generic representation of a pressurized metered dose inhaler (pMDI). The results show an excellent correlation with the expected trends. Future work will address the current limitations of the system, including incorrect use of the device and re-inhalation of exhaled drug dose. 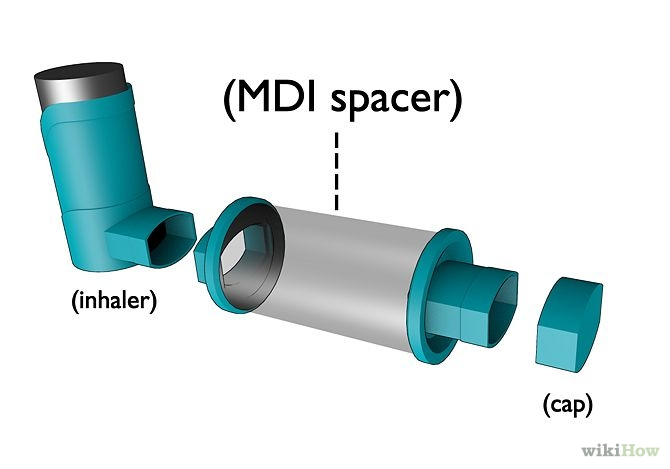 pMDIs are portable, user-actuated devices used to administer drug doses into the lungs and airways. The drug is either a liquid or a solid in liquid suspension, stored in a small pressurized cylinder with a propellant spray. When the device is actuated, a fixed amount of the pressurized suspension is released through a nozzle. As the suspension reaches atmospheric pressure at the nozzle exit, the nozzle geometry and rapid evaporation of the propellent causes the suspension to be aerosolized into droplets that are sufficiently small to remain in suspension in the air for several seconds. The properties of propellant and nozzle design, strongly dictate the efficiency with which the liquid suspension is aerosolized [226] .

The user coordinates actuation of the device with a controlled inhalation, so that the aerosolized dose is inhaled deep into the lungs. Immediately prior to actuation, the user exhales as much as possible to their minimum lung volume (residual volume). As the device is actuated, the user begins a steady inhalation until they have reached their maximum inhalation volume (vital capacity). At the end of the inhalation, the user holds their breath for up to 10 seconds and then exhales. In this way, the user maximizes the amount of inhaled dose that is deposited in the lungs.

To help poor coordinators, the pMDI is often used in conjunction with a spacer. A spacer is simply a closed volume in front of the nozzle that is held between the pMDI and the mouth. When the pMDI is actuated, the aerosolized dose is initially contained within the spacer. If the user begins inhalation too late or breaths in too shallow, the spacer holds the aerosolized dose and extends the time over which the user can inhale and still maximize lung deposition.

Most pMDI's deliver 100-200 μg of a substance per actuation, but a large portion of the dose does not actually make it into the lungs. Many studies, including one by Newman [224] in 1991, showed that as little as 20% of the drugs delivered by the pMDI actually make it into the lung tissue. The actual amount depends strongly on droplet size and the technique of the user. Users categorized as "good coordinators" average 20% lung deposition, but can often get much better depending on how "good" they are. "Bad coordinators" - those that actuate the inhaler too early, too late, or fail to inhale sufficiently - do much worse. Table 1 summarizes the results from Newman's study.

Regardless of how coordinated the user is with the device, a large portion of the dose is generally deposited the oropharynx, lost in the actuator and nozzle, or is exhaled. In engine, the portion of aerosolized dose lost to deposition in oropharynx region is estimated using an empirical relation developed for a study conducted by Yeh in 1996 [363] ,

In this relation, the oral deposition fraction (ODF) is a function of droplet density, ρ(g/cm3), droplet diameter, d (μm), and flow rate, Q (cm3/sec). Nozzle and actuator losses are generally design dependent and will vary depending on the specific pMDI used. In the engine, nozzle losses are treated as a property of the pMDI.

The inhaler implementation is used to meet the requirement to administer a beta agonist (e.g., albuterol) as an intervention action for acute asthma. 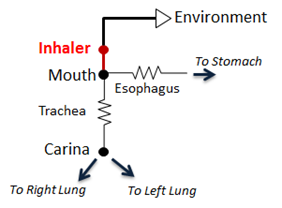 Figure 2. Inhaler circuit (red) connected to the Respiratory System circuit. The inhaler circuit consists of a single inhaler node that is added the respiratory circuit when the pMDI is actuated.

To model coordinated use of the pMDI, conscious breathing actions were implemented. The end volumes and time lengths for exhalation, inhalation, and holding breath are specified as parameters for these actions, along with pMDI actuation timing. When the pMDI is actuated, the drug dose is added to the atmospheric air in the inhaler node. Depending on airflow direction, the air/drug mixture in the inhaler node flows into the mouth or out into the external environment. A fraction of the drug that flows through the mouth and trachea is removed from the system per Equation 1. The remaining drug mass flows into and out of the lungs and alveoli. The drug mass in the inhaler node is assessed each time step during the scenario. When the drug mass in the inhaler node drops to approximately zero, the inhaler is disconnected from the respiratory circuit.

Once in the alveoli, the drug diffuses into the blood stream. See the Drugs Methodology for pD and pK effects.

The volume of the inhaler node is filled with atmospheric air at the beginning of the scenario.

The system determines if and when an inhaler actuation command is initiated.

When an actuation command is detected, the following occurs:

While the inhaler circuit remains connected to the respiratory circuit, the following occurs:

After the inhaler circuit is disconnected from the respiratory circuit, the following occurs:

The current implementation has no specific Process functionality for the inhaler. Inhaler processing is currently done in the Respiratory System with the combined circuit methodology.

Connecting to the Respiratory Circuit

When the pMDI is used by a patient, there is a direct connection that allows air to flow freely between the inhaler and respiratory circuits. Both individually defined circuits are combined into a single circuit that is then used for calculations.

Table 2. The table shows the basic settings parameters used in the engine as inputs to use the pMDI

Coordinated use of the pMDI depends on the uses of the conscious breathing action/command set. Refer to the Respiratory Methodology for details.

pMDI actuation is part of the conscious breathing action/command set described in the Respiratory Methodology.

If the inhaler is actuated too soon after an initial actuation, the engine triggers an event to alert the user.

pMDI actuation and coordinated breathing actions were validated in several scenarios. A summary of this validation is shown in Table 3. For each scenario, the table shows the total number of results in each category. For many investigated scenarios, the model shows good agreement with the expected trends. For the scenarios that did not match with the expected trends, improvements are planned for future engine releases.

Single Actuation with Correct Use

The single actuation scenarios with and without a spacer use the same setup and actions otherwise. Therefore, they produce the extremely similar results. Validation results for a single pMDI actuation using a metered dose of 90 μg of albuterol with good coordination. Results agree very well with published data.

These scenarios use the inhaler about as incorrectly as possible by activating it at the moment the exhale begins - thereby, blowing the albuterol out of the inhaler into the environment.

The incorrect use, single actuation scenarios with and without a spacer use the same setup and actions otherwise. Therefore, they produce the similar results, except for the amount of alburterol that gets into the body. Validation results for a single pMDI actuation using a metered dose of 90 μg of albuterol with poor coordinationagree very well with published data. Without the spacer present, when the user exhales, the entire dose is lost to the exterior environment. In reality, some of this dose is inhaled from the remaining aerosolized mass in the surrounding air. The inhalation of exhaled albuterol is not currently modeled.

Figure 5. Select outputs from the single actuation scenario with incorrect use and without the use of a spacer.

When the spacer is included with the inhaler, a small amount of alburterol still gets into the body.

Below are validation results for two non-concurrent pMDI actuations using a metered dose of 90 μg of albuterol per actuation (180 μg total) with good coordination. Results agree very well with data.

There are no planned near term additions.