This Tissue system manages the extravascular space. It handles substance transport between the organs and the blood vessels, and it computes substance storage, transformation (e.g. chemical conversion), clearance, and excretion.

The Tissue system is a low-resolution, mid-fidelity model of the tissues of the body. The system is mechanically tied to the Cardiovascular and Respiratory systems, and it interacts with the Energy and Drugs systems. The tissue system handles the non-advective transport of substances between the intravascular and extravascular spaces, as well as the conversion of substance (including chemical conversion of species and clearance/excretion). The metabolic production and consumption of substances takes place in the tissue system, and the tissues generate substances that are produced in the organs by any process or mode.

Groups of cells in the body which share a common embryonic origin can be described collectively as a tissue. In the classical organizational hierarchy of organisms, tissues are at the level directly below organs, meaning that groups of tissues interacting to perform a function are an organ. There are four types of tissue in the human body: epithelial, connective, muscle, and nervous tissue. In the engine, the term tissue refers to the extravascular space of an organ. In other words, 'tissue', is a collective term which generally refers to the parenchyma.

Like the other systems, the Tissue system uses the execution structure described in System Methodology.

Substance production and consumption is computed based on the metabolic rate and the respiratory quotient.

Gases are transferred from the lungs (alveoli) to the pulmonary capillaries and vice versa during this calculation. This allows for the transport of oxygen into the cardiovascular system from the ambient air, providing the required substances for metabolism. By the same process, carbon dioxide waste is removed from the Cardiovascular System and moves through the Respiratory System into the ambient air.

In this method the tissue volumes are summed in order to compute total body water. Body system level data is also set in this method. In the future, this method will compute and set tissue substance concentrations and trigger concentration-based events such as fasciculation.

At this time the there are no postprecess steps in the tissue system.

Assessments are data collected and packaged to resemble a report or analysis that might be ordered by a physician. No assessments are associated with the Tissue system. 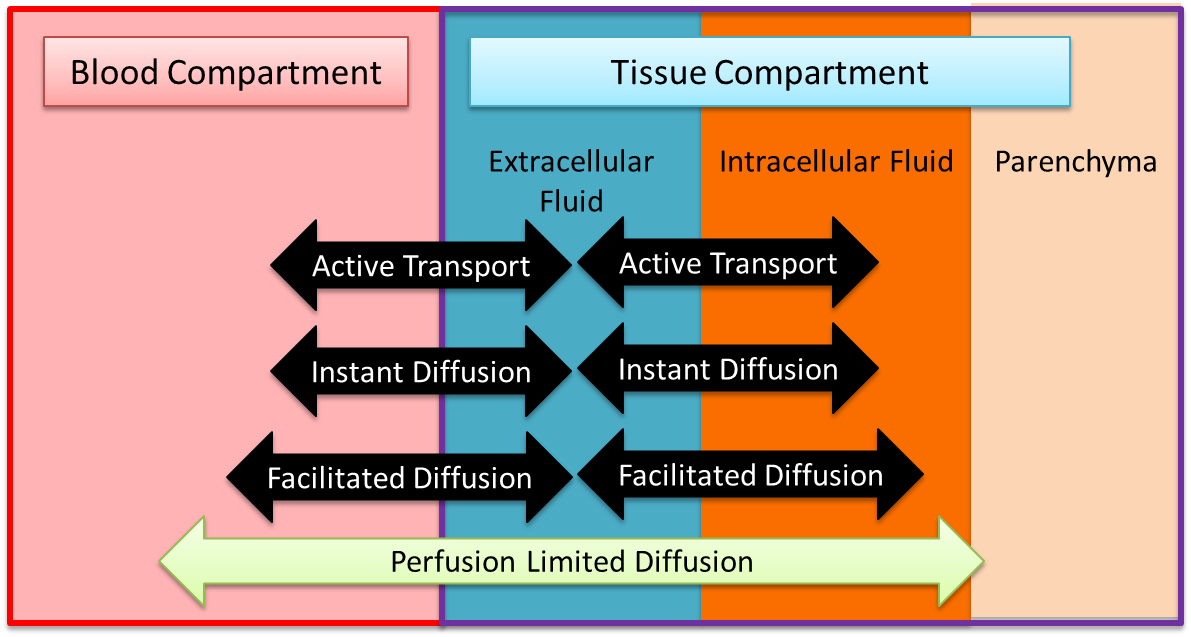 Figure 2. The tissue compartment is partitioned into two distinct fluid spaces, and the non-fluid volume and mass are accounted for. There are several modes of transport between the spaces. 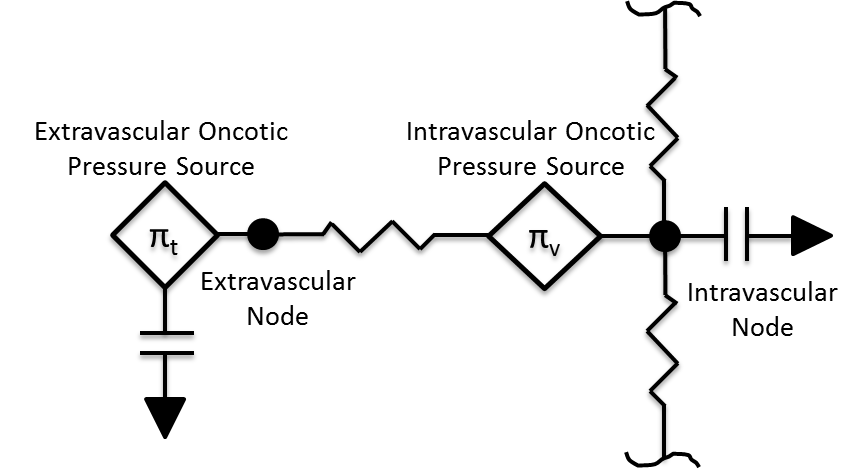 Figure 3. The tissue compartment is partitioned into two distinct fluid spaces, and the non-fluid volume and mass are accounted for. There are several modes of transport between the spaces.

The volume in the tissue compartment is partitioned into the extracellular and intracellular space, as shown in Figure 2. The extracellular partition is connected to the circuit model, whereas the intercellular partition is seperate to allow for a non-linear control of the fluid flow dynamics. Although fluid moves according to the circuit model, there is no advective transport into the parenchyma. All substance transport into the tissue fluid space is simulated using one or more of the transport modes described below.

The Tissue system is heavily dependent on the patient configuration. Fluid volume distributions and parenchyma masses both depend heavily on the patient sex, height, weight, and body fat fraction. Transport properties are also affected by patient variability. For example, permeability coefficients are computed from membrane permeability and membrane surface area, where the surface area is a function of the tissue mass, which in turn is a function of the patient weight. A detailed discussion of patient configuration and variability is available in the Patient Methodology report.

Figure 4. Alveolar gas exchange is a single-step, lumped-diffusion process driven by a partial pressure gradient, where the partial pressures are computed using Equations 2 and 3.

Where, Pp is the partial pressure, C is the concentration, d is the density, Cs is the solubility coefficient, P is the total pressure, and Vf is the volume fraction.

Some substances are able to diffuse across biological membranes at a rate that ensures concentration equilibrium within one engine time step. The instant diffusion model is included in the Tissue system in order to simulate transport processes that fully evolve in a time period much smaller than the engine time step. All of the gases are transported by instant diffusion.

Simple diffusion is an implementation of Fick's law in one dimension with a known constant distance. In this case, Fick's law can be described by Equation 7.

Where Jx is the mass flux (mass per area-time) of substance X, [X]v,t is the concentration of substance X in compartment v (or t), and Px is a proportionality constant defining the permeability. The flux is multiplied by an area to obtain a rate of mass transfer. It is incredibly difficult to experimentally determine the capillary surface area for a given tissue, and it may be impossible to experimentally determine the total cellular membrane surface area. Additionally, lumped tissue models can be difficult to delineate. In the engine, the capillary and cellular membrane surface areas are assumed to be proportional to the mass of a given organ or tissue group, such that the mass transfered in one time step (Dm) may be computed by Equation 8, where k is the empirically-determined constant relating the tissue mass (mt) to the surface area. 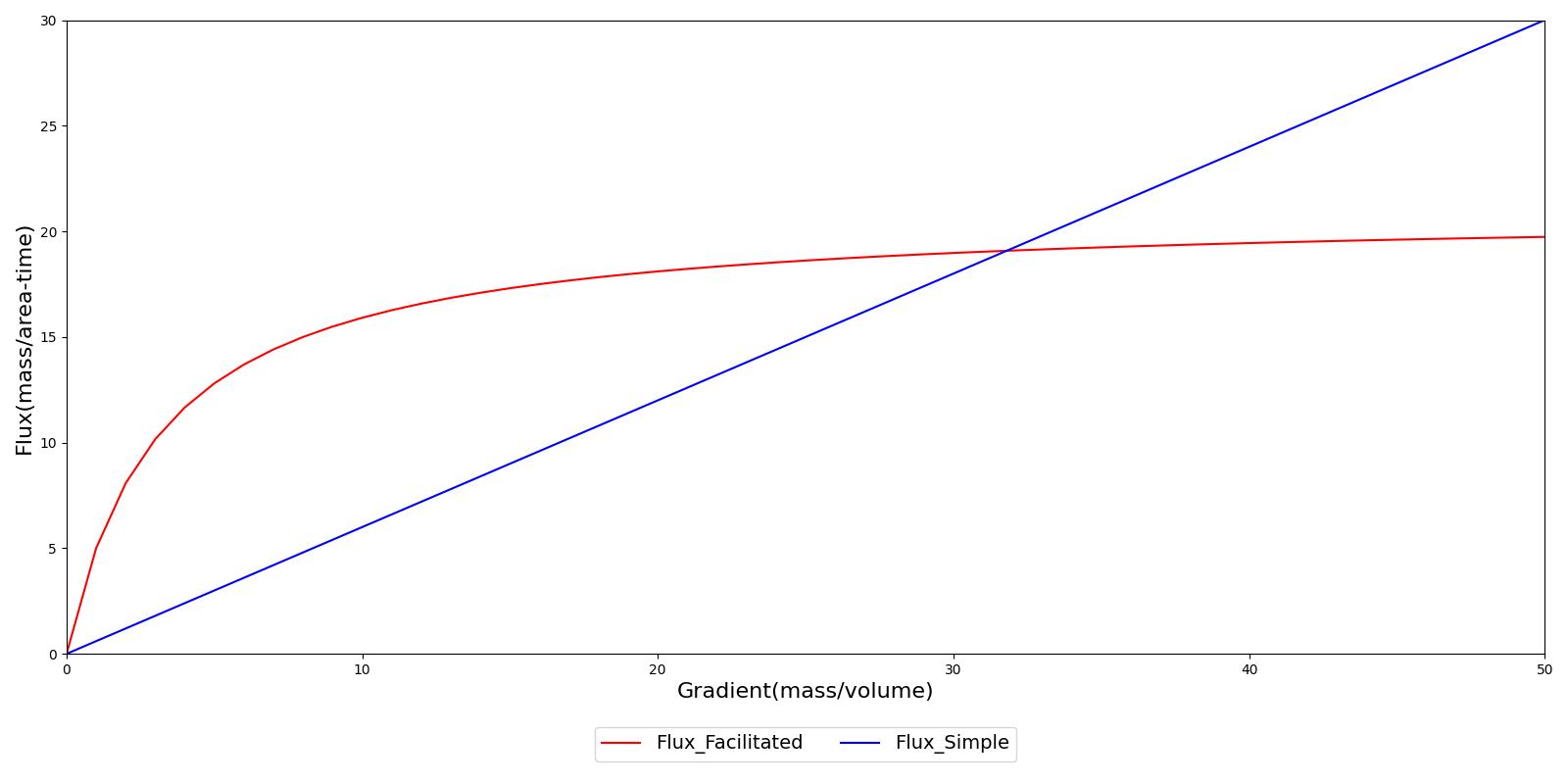 Figure 5. In simple diffusion based on Fick's law, the substance flux is directly proportional to the concentration gradient. There is no upper limit to transport. In contrast, the flux is asymptotic in facilitated diffusion, reflecting a saturation of transporters in the membrane. These two transport processes can work in concert.

Active transport is a coarse model of the energy-requiring transport processes (e.g. the sodium-potassium pump). The active transport functionality is currently inactive while work continues on comprehensive substance handling. When complete, active transport will use energy (through feedback to consumption rates of energy-containing substances) to move substances across barriers. 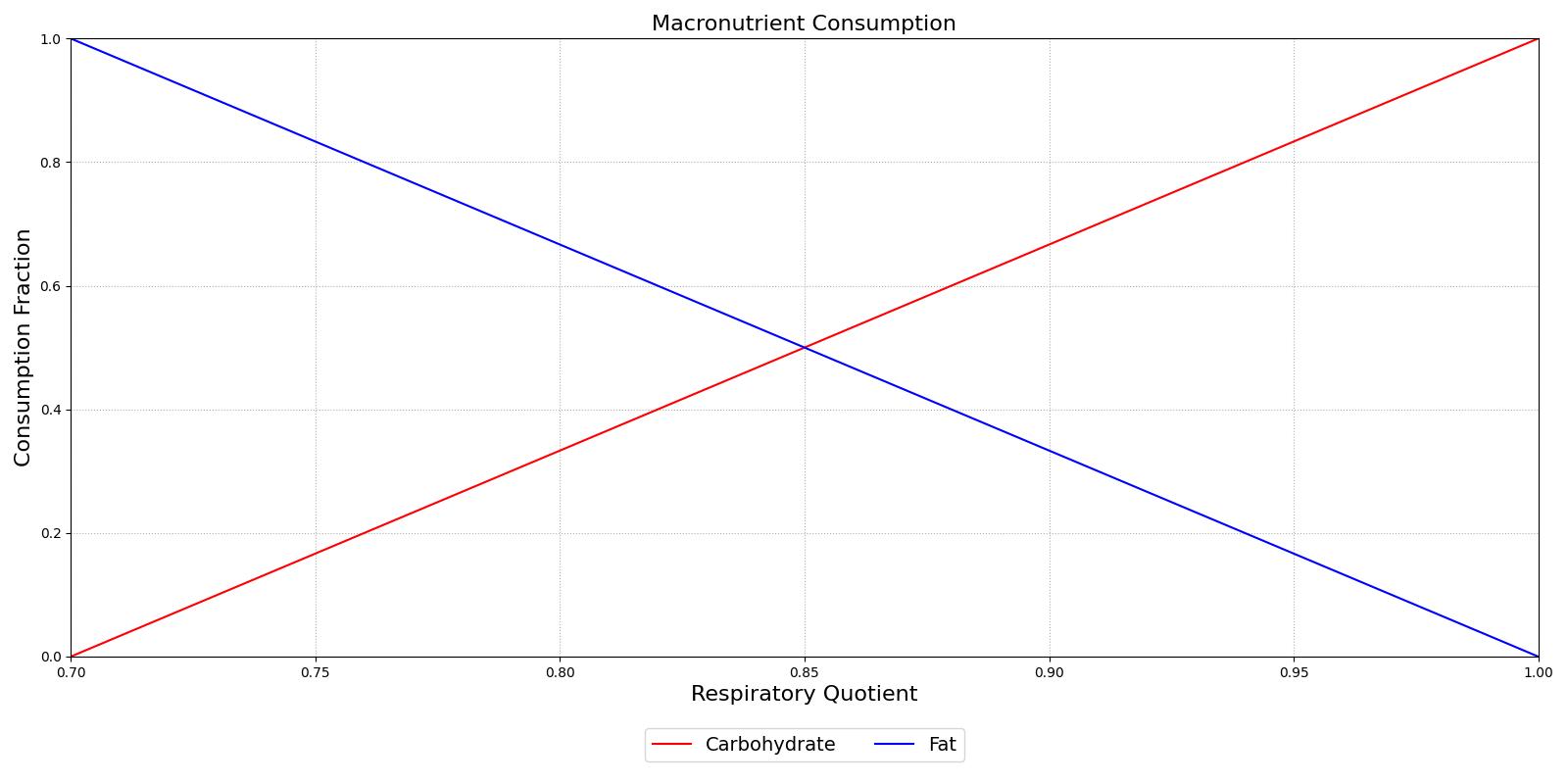 After the fractions of the metabolism have been defined, the exact consumption rates can be determined from molar ratios of nutrient input to ATP (energy) output. Table 1 shows the molar input to output ratios.


*Table 1. The molar ratio of nutrient to output of ATP [131]. This gives ratios of the molar amount of each nutrient required to the moles of ATP produced*

The substance to ATP ratios are used to determine the consumption and production rates in the tissues, given in units of moles per time in Table 2.

There are no conditions associated with the Tissue system.

At this time, there are no insults or interventions associated with the Tissue system. Other system actions can affect the diffusion properties or other transports by modifying the diffusion surface area. An example of this is found in the Respiratory Methodology for lobar pneumonia. As the alveoli fill with fluid, they are unable to participate in gas exchange. This reduces the alveoli surface area, which leads to a reduction of available oxygen in the CardiovascularSystem and the EnergySystem.

Verification of the diffusion methods is achieved through several units tests. One of the simple diffusion unit tests was used to generate data for Figure 7. The figure shows the time-evolution of the concentrations of four different compartments. Table 3 shows the initial conditions. Note that the units are arbitrary, thus not shown. The red, blue, and green compartment all share a boundary with the yellow compartment, but not with each other. 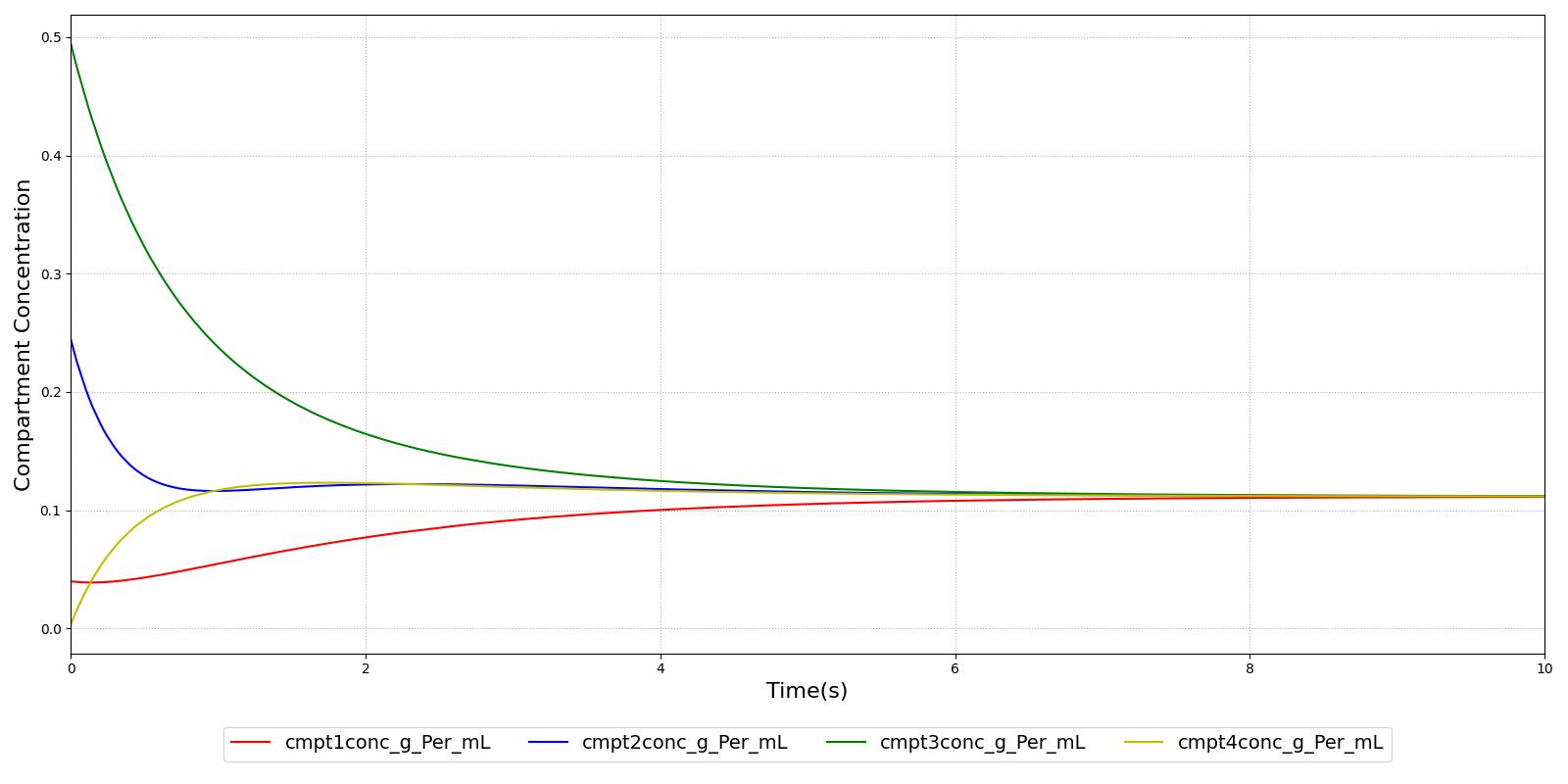 Figure 7. Four compartments start with different concentrations which equilibrate after some time. Initial conditions are shown in Table 3 above.

The tissue system volumes are validated using data from [336].

Table 5. Validation of the resting physiologic state comparison of compartment-level outputs from the engine to referenced values. The compartments are currently validated on a flow/volume basis. Flows and most of the volumes show good agreement with validation values.

There are currently no validated actions or conditions associated with the tissue system. However, there will be condition validation after improvements are made to the dehydration and starvation condition models.